20 YEARS AGO VERY FEW PEOPLE HAD HEARD THE NAME CHRIS WALLER. IN 1998 THE YOUNG KIWI LAD FROM FOXTON TOOK A MARE ON A JOURNEY TO SUCCESS AT WYONG; THE REST, AS THEY SAY, IS HISTORY.

These days, Chris Waller is best known as the trainer of incredible mare Winx, whose career he has handled superbly. The pressure which he faces every time she races, and every time a race is chosen for her, must be huge but he stands calm and assured in the eye of the storm, his dignity and composure matched only by his humility, courtesy and candour.

Like Winx, he is a credit to the sport, just as he has been ever since he arrived in Sydney as a complete unknown only a couple of decades ago. 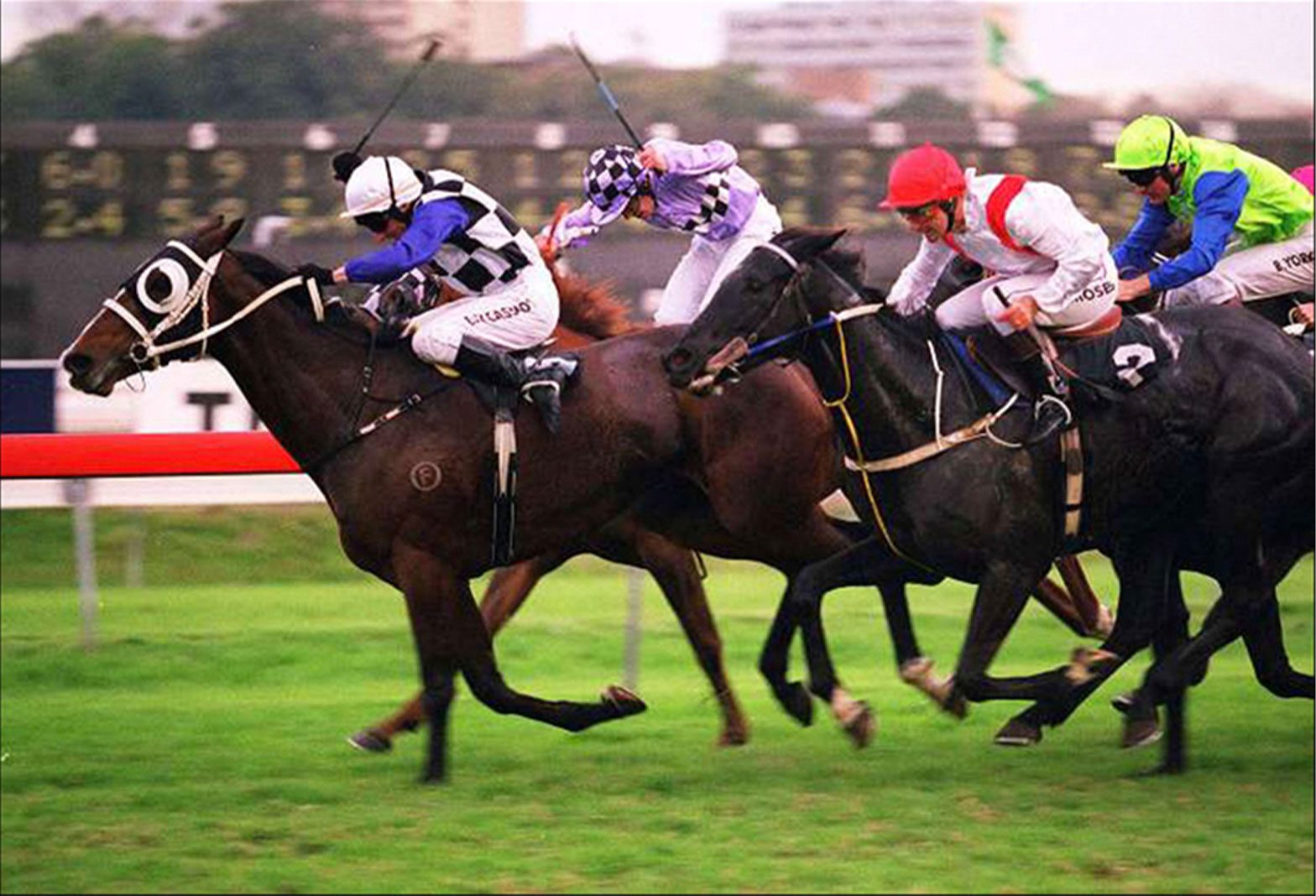 Unlike so many who have made it to the top of the training tree, Waller, the son of a dairy farmer from Foxton, about 100 km north of Wellington on New Zealand’s North Island, started out with neither family connections nor money behind him.

Foxton might only have a population of about 3,000, but it has a racecourse and training track. For many years it also had Paddy Busuttin, one of the leading trainers in the land and forever synonymous with the great gelding Castletown (NZ) (One Found Stirling {Ire}) whose 16 wins included the G1 NZ Derby in 1989, the G1 Wellington Cup in 1991, ’92 and ’94, the G1 Auckland Cup In 1992 and the G1 Caulfield S. in the same year. He was also placed in both the G1 Melbourne Cup and GI Sydney Cup.

Waller started work for Busuttin when he left school, impressing his boss so quickly that he was asked to accompany Castletown on a trip to Sydney when still a teenager. From the outset, Waller’s dream was to be a trainer; and the dream became a reality, albeit in a very small way, after Busuttin accepted an offer to train in Singapore in 1997.

In the winter of 1998, Waller was running a 4-year-old maiden called Party Belle (NZ) (Oregon {USA}) around the lesser tracks in the central and southern areas of the North Island. She wasn’t doing particularly well. Her trainer, though, was bold enough to take her across the Tasman to race In New South Wales. 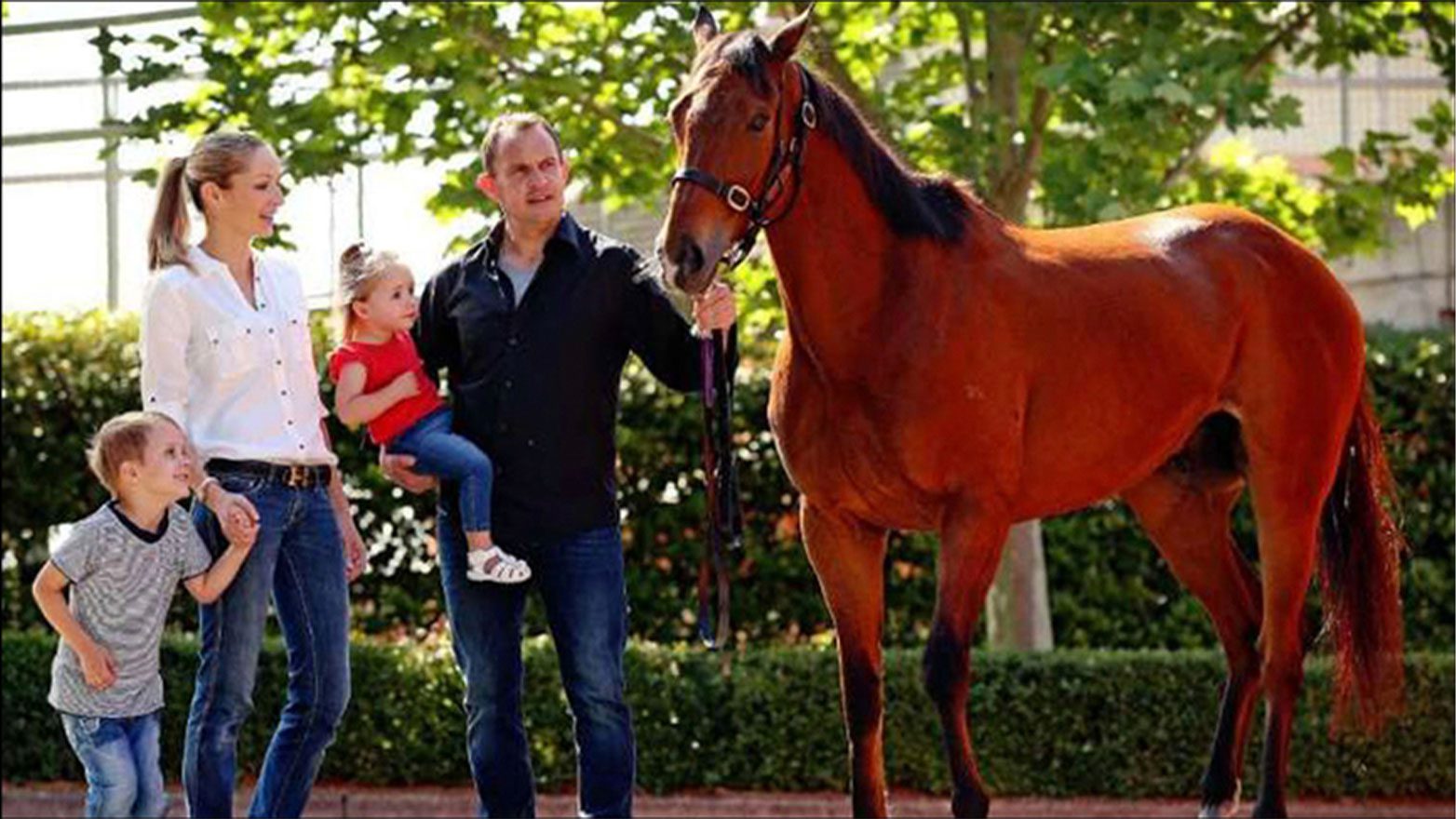 Stephanie and Chris Waller with their two children Tyler and Nikita

She had turned five by the time that she started racing there but, remarkably, she won at the third attempt in Australia, taking a 2100m maiden at Wyong in September 1998, ridden by Waller’s compatriot Opie Bosson. She backed up two weeks later by taking a Class 1 at Kembla Grange; in another two weeks she completed a hat-trick in a Class 2 at the same track. She finished her preparation by contesting a listed race at Randwick in October when, unsurprisingly, she was out of her depth.

It had, though, been a very rewarding trip, and it gave her young trainer plenty to think about on his return to Foxton.

After five unsuccessful runs in New Zealand over the summer and autumn, Party Belle and her trainer were back in Sydney the following winter when, astonishingly, the mare again came alive, scoring a hat-trick in town in May 1999 (at Randwick, Warwick Farm and Randwick) under another Kiwi hoop, Larry Cassidy. Omens don’t come any stronger than this one. Waller’s future surely lay in Sydney rather than Foxton.

It shows you can do it; it doesn’t matter what your bank balance is or where you’ve come from or what your experience is, anybody can do anything in lifeWaller

Redevelopment work at Rosehill at the end of the last century meant that there were vacancies for new trainers. Waller let the Sydney Turf Club know that he was available and was duly offered stabling. And the rest is history.

Despite starting with a seemingly minimal chance of filling the 20 boxes which he had been allocated because virtually nobody knew who he was and he had no money, Waller just kept his nose to the grindstone, concentrating on the few horses which he did have, conducting his business with friendliness and integrity, and working very, very hard.

Initially the Waller household could only rely on the earnings of his wife Stephanie from her modelling career, but slowly the Sydney racing establishment began to notice that there was a young Kiwi making a great fist of the training out at Rosehill: and he seemed to be a nice guy, and honest too. Success started to follow. 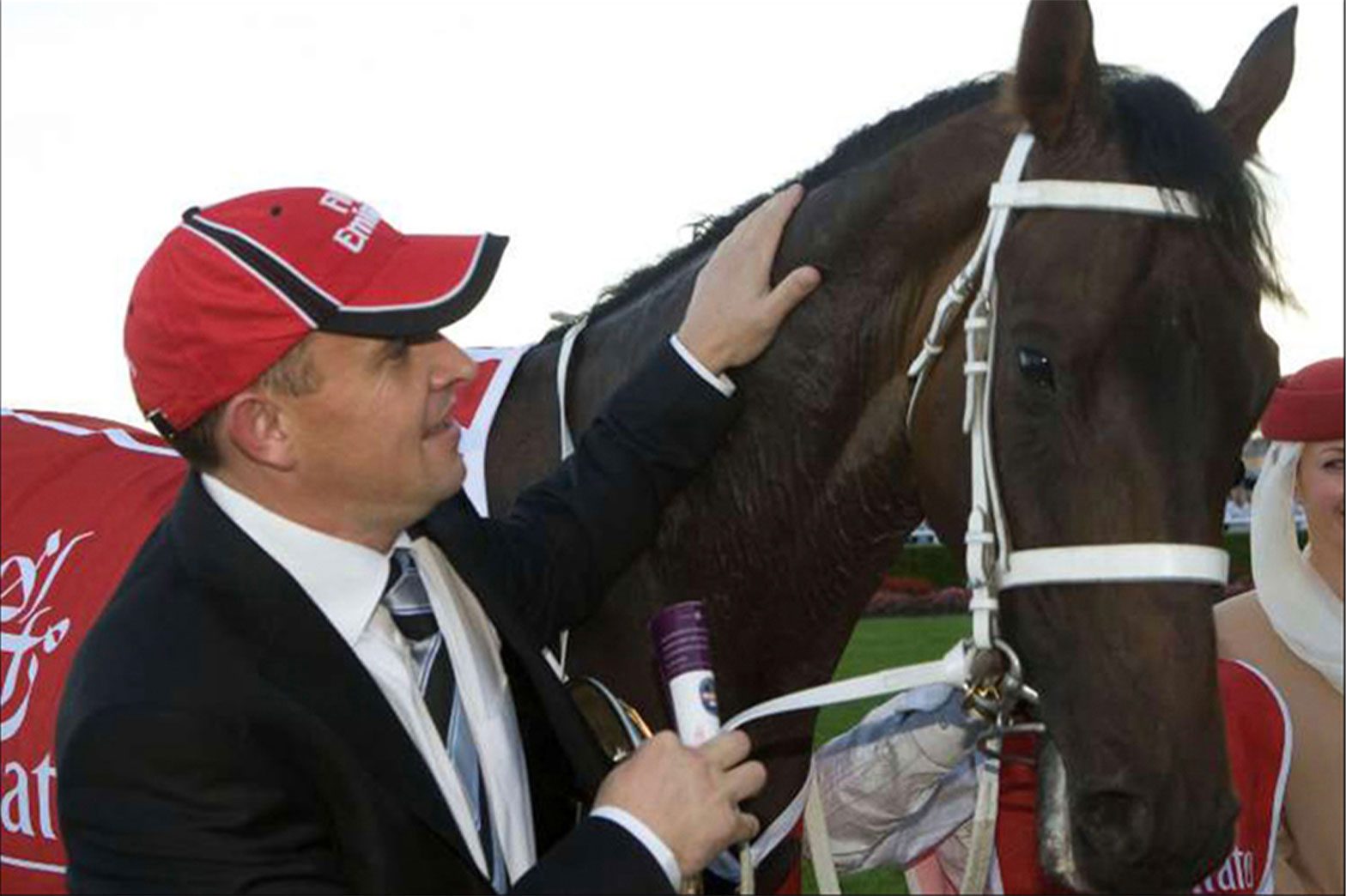 He won it again in 2010 with Rangirangdoo (NZ) (Pentire {GB}), a terrific horse who finished in the first three in seven Group 1 races in Sydney between 2009 and 2012. Sacred Falls (NZ) (O’Reilly {NZ}), who had won the G1 NZ 2,000 Guineas from Tony Pike’s Cambridge stable five months previously, gave the trainer his third Doncaster in 2013, and then won the race again the following year. That latter success was particularly notable as Waller saddled the trifecta.

Twelve months later Waller won the race again when Kermadec (NZ) (Teofilo {Ire}) got home in front of the Japanese raider Real Impact (Jpn) (Deep Impact {Jpn}). And then in 2016 Winx (Street Cry {Ire}) helped him to take the race for the sixth time in nine years. 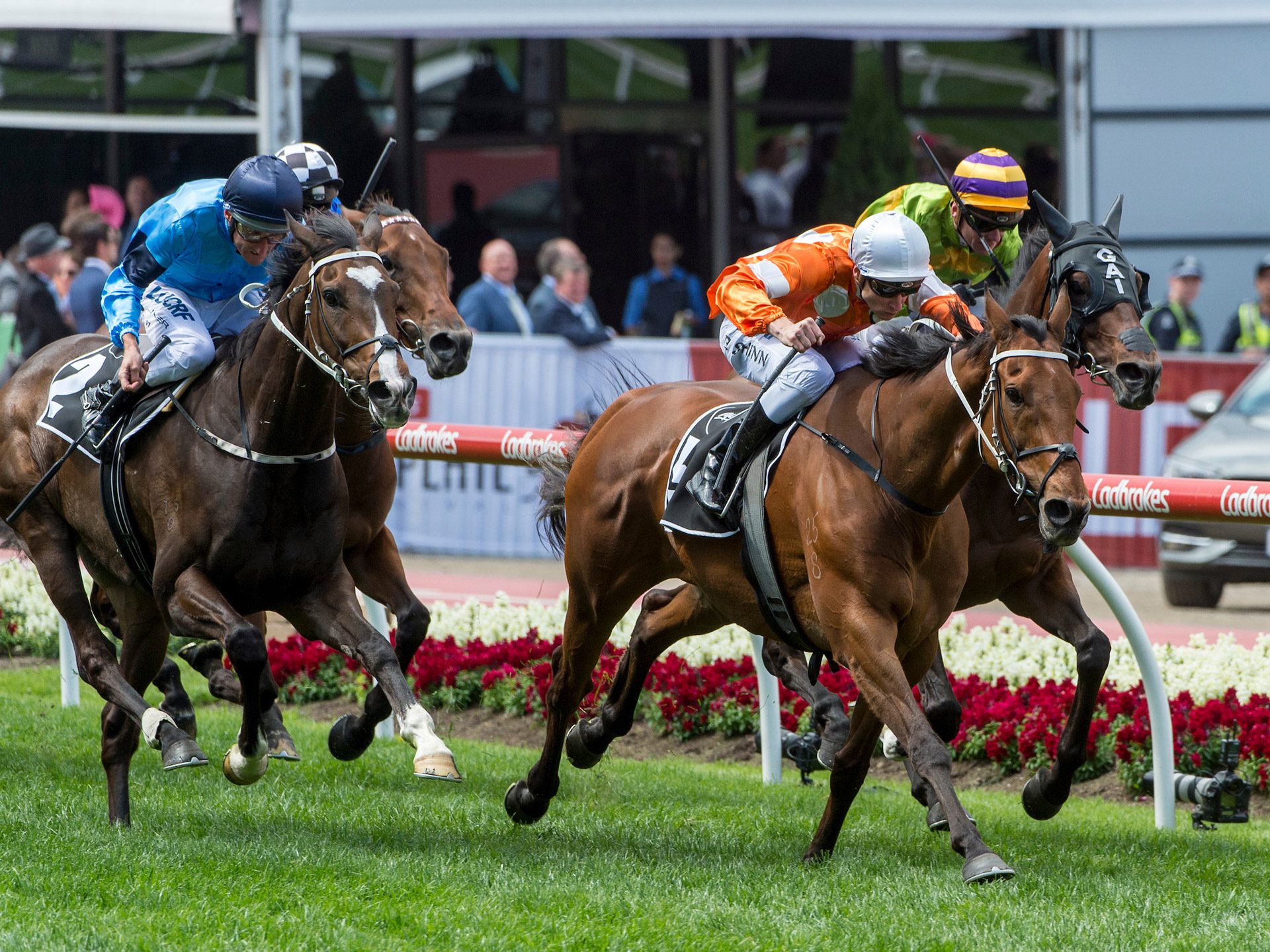 While NZ—breds enabled Waller to establish himself as the man to beat in the Doncaster, he was having similar success with his imports from Europe. Lacking the patronage in the early days to be competitive at the top end of the yearling market, he became the pioneer in the now well-travelled road of importing proven middle-distance and staying gallopers from Europe, achieving notable success with a large number of horses bought either at Horses-in-Training sales or privately by roving Kiwi bloodstock agent Guy Mulcaster.

Two of these won the G1 Sydney Cup: Stand To Gain (Ire) (Hawk Wing {USA}) in 2011 and Grand Marshal (GB) (Dansili {GB}) in 2015. More recently, Waller won the race in 2018 with the veteran Who Shot Thebarman (NZ) (Yamanin Vital {NZ}), a 9-year-old gelding who already had Melbourne and Sydney Cup minor placings on his CV.

It has not just been imports from New Zealand and Europe who have helped Chris Waller’s journey in less than two decades from obscurity to dominance. Financial constraints meant that they were the mainstays early on, but success has bred success and he now receives his quantum of Australia’s best-bred yearlings each year.

When you come from nothing, and never had anything, the only thing that digs you out of the hole is hard workWaller 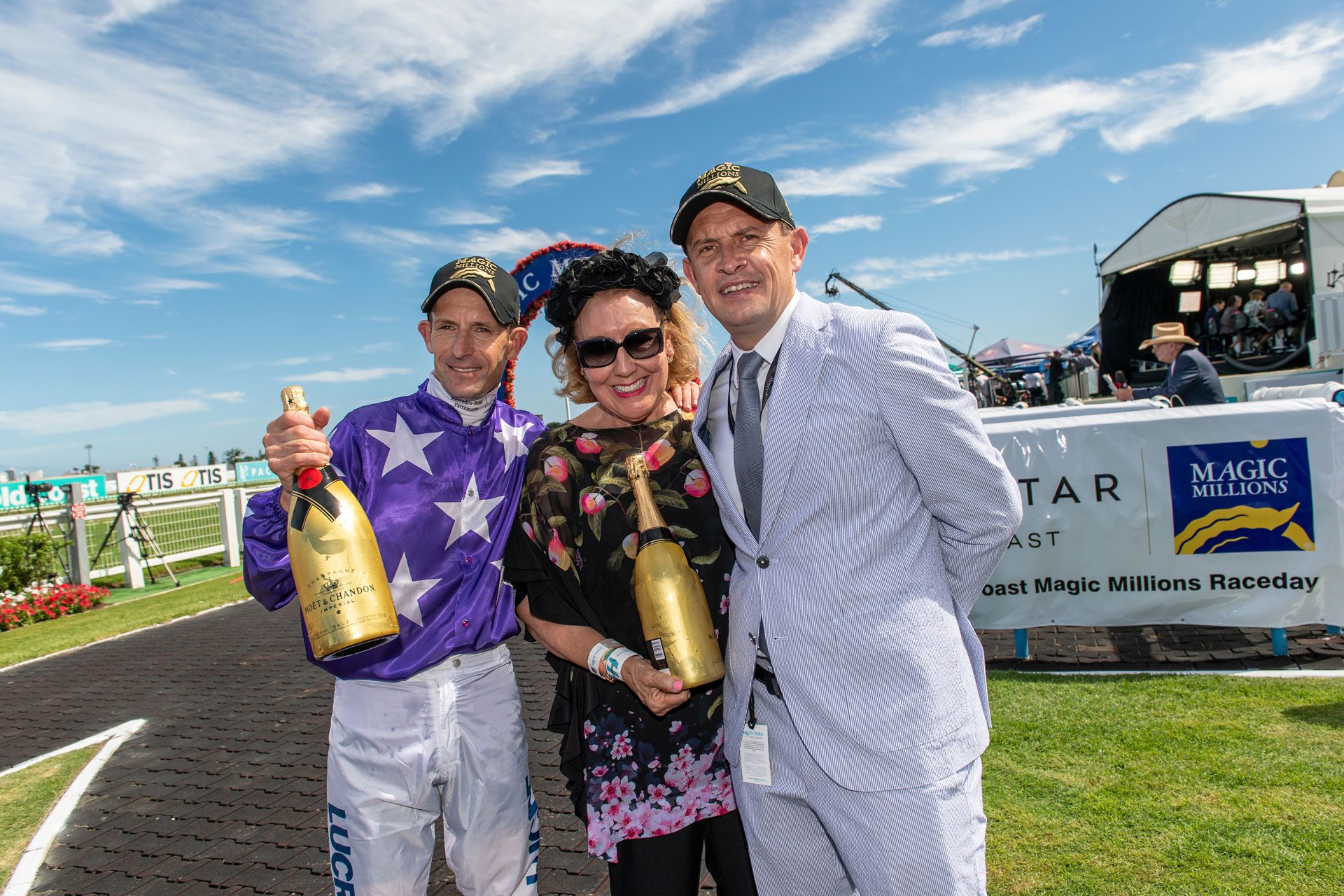 One notable advance in this respect came after the Ingham family sold the entire Woodlands Stud operation to Sheikh Mohammed in 2008. Bob Ingham wished still to race a much smaller string of high-class horses in the famous cerise silks — and Chris Waller was chosen to train them.

Another high-profile addition to Waller’s list of clients came in 2014 when Denise Martin announced that she would henceforth be directing her Star Thoroughbreds syndicates towards him rather than, as previously, Gai Waterhouse. This, particularly, has helped Waller to break into the one area in which he was previously less of a force: Australia’s biggest races for 2- and 3-year-olds.

Top-class success with the likes of Foxplay (Foxwedge) and D’Argento (So You Think {NZ}) has resulted from the Star Thoroughbreds association, sure to bring more fruit in the upcoming seasons.

Having started the new century on the bottom rung of the ladder, Chris Waller moved into third place in the Sydney trainers premiership in 2007/08, behind Gai Waterhouse and Peter Snowden. In 2009/10 he advanced to second place (behind Snowden,with Waterhouse in third). In 2010/11 he became champion trainer for the first time, and has consolidated that position ever since. The 2012/13 campaign was notable not only in that he broke TJ Smith’s 37-year-old record of 156 winners in town, but also because he reached a level of dominance which saw his total (167.5) more than double that achieved by the runner-up Gai Waterhouse (who sent out 83 winners).

In the 2017/18 season he trained 189 winners in town, 95 ahead of runner-up James Cummings. Those winners formed part of a massive state-wide total for the campaign of 258. 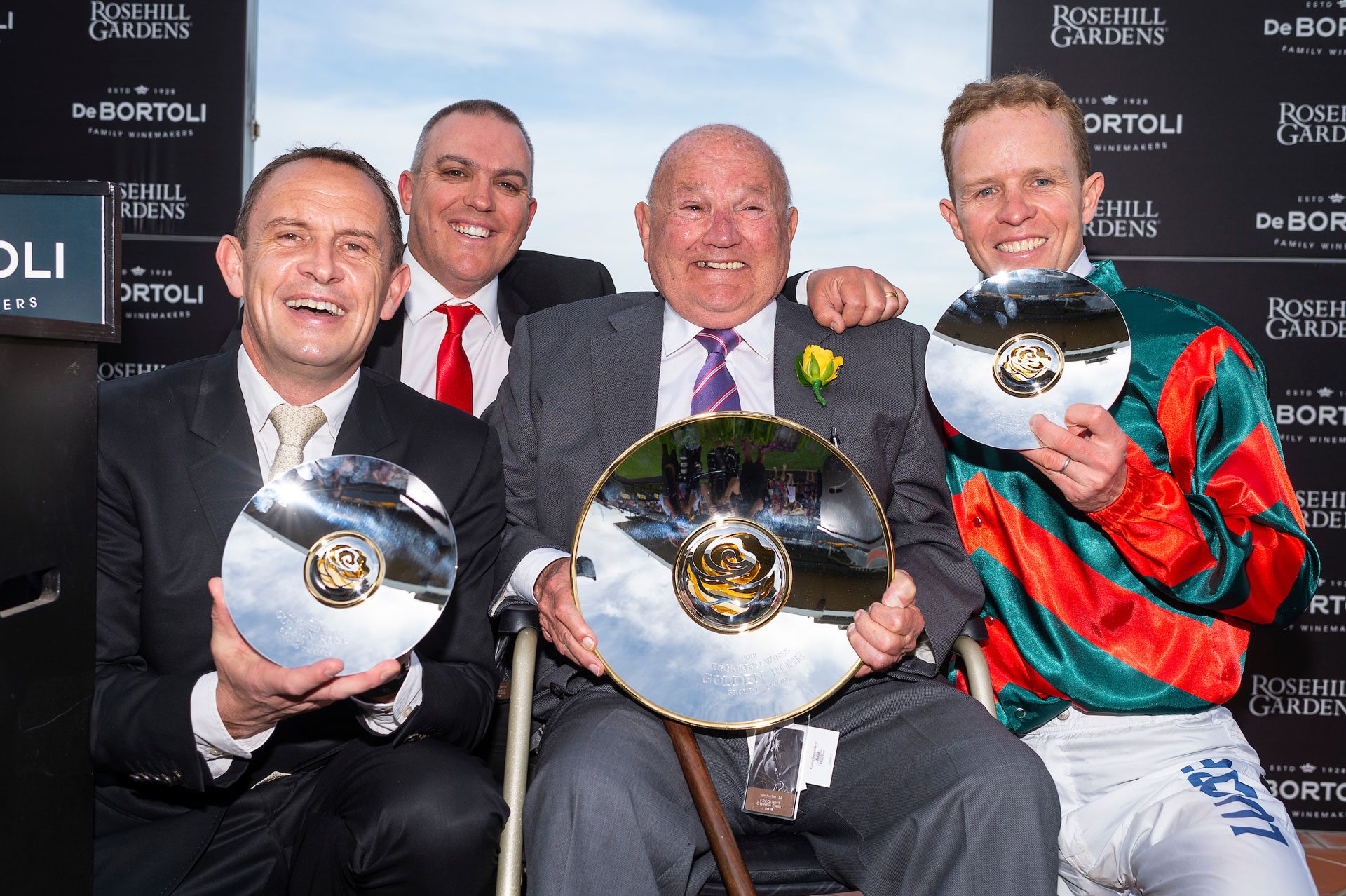 Kerrin McEvoy, Chris Waller and the Owners of The Autumn Sun

During the course of the campaign he sent out eight individual horses to win a nationwide total of 13 Group 1 races (seven in Sydney and three each in Melbourne and Brisbane). In addition to Winx, Who Shot Thebarman and D’Argento, his Group 1 Winners during the season were Shillelagh (NZ) (Savabeel), Unforgotten (Fastnet Rock), Comin’ Through (Fastnet Rock), Youngstar (High Chaparral {lre}) and The Autumn Sun (Redoute’s Choice).

That Group 1 tally swelled to 18 in the 2018/19 season – 13 in New South Wales, four in Melbourne and one in Brisbane. Winx and The Autumn Sun were the primary contributors to that total, scoring seven and five Group 1 victories respectively.

Overall, Waller won 339 races during the 2018/19 season, 220 of them in town, for total stakes in excess of $43.6 million.Despite the retirement of Winx, Waller still lifted his earnings past $44 million during the 2019/20 season, winning both of Sydney’s two new mega-rich races.

Yes Yes Yes (Rubick) produced a scintillating performance to win the $14 million The Everest at Randwick in track-record time. The 3-year-old colt’s sparkling victory against top-class older opposition set him up as one of the hottest stallion prospects in the world.